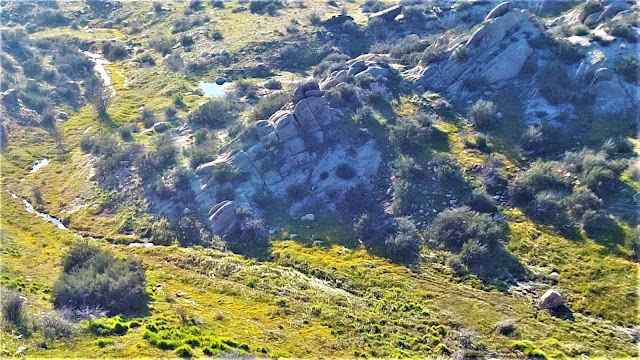 This is a drone image of an area in the Cajon Pass, that I took in April of this year.  The drone was launched from a clearing along the Cleghorn Trail.  What intrigued me was the little pond, which can be seen nestled among the rock formations.

Posted by SandNSky at 8:50 AM No comments:

I would venture a guess that the Joshua Tree National Park's Geology Tour Rd. is  skipped by most park visitors.  This is because that four-wheel drive is recommended for travel along this road, and most of the vehicles that I've seen during my visits are of the two-wheel drive variety.  Plus, many owners of four-wheel drive vehicles are reluctant to drive off-road with them.  To the folks in the latter category, I say: "You don't know what you're missing."  Now, that statement can be applied to many off-the-beaten-path areas throughout the U.S.  Let's face it; venturing off pavement can lead one to sites rarely seen (in person) by those who stay on the ribbons of concrete.

I've chosen a few images from my drive along the Geology Tour Road in early March, 2020. 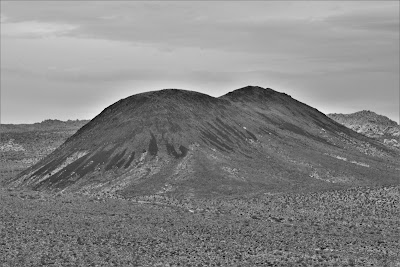 The Geology Tour Road is an 18-mile loop; this image was taken approximately mid-way along the trail, looking north across Pleasant Valley.  If I'm correct, this is Malapai Hill.  Malapai Hill is part of an ancient volcano.  Image:  1/6th sec. @f/22.  ISO 100.  Nikon D7200.  All rights reserved.

As off-trails go, the Geology Tour Road is fairly easy.  The terrain varies from soft sand, to hard-packed dirt, and areas that are strewn with large rocks.  Therefore, a vehicle with higher ground-clearance is required here.  And, four-wheel drive is needed for the sand.

A word about the sand along this trail.  If you have four-wheel drive and stay on the trail, you should have little trouble.  However, the sand along the sides of this trail is VERY deep in places, and you can get stuck.  I saw this first hand, approximately three years ago:

On this trip, my wife and my (then) eight year-old niece had just driven approximately half-way through the trail, when I noticed a small SUV that was stopped, roughly fifteen hundred feet ahead of us.  So, someone had stopped to take some photos, you might think.  The problem was that this vehicle was stopped on the side of the trail, with its rear-end facing the trail.  Oh, and did I mention the GMC Yukon parked behind it, that was actually blocking the trail?

Obviously, something was amiss, and the problem became clear as we pulled up.  The small SUV was actually a Lexus luxury model that had gotten stuck in the deep sand on the side of the trail.  And, what of the Yukon?  The two men sanding between the two vehicles provided a clue.  Both of them had removed their belts, and they were busy trying to link the belts together in order to form a makeshift tow strap.  "Keep your pants on" I said.  Well, ok, I didn't actually say that, because neither of these men, nor their female companions spoke much English.  But, I was able to gather that they attempted to turn around on the trail, and the driver of the Lexus went a little too far into the sand.

So now, the the Lexus was "high-centered" on a mound of sand, with its wheels spinning fruitlessly.

Using a combination of verbal communication and pantomime, I asked one of the men if anyone in their party had a shovel.  One of the women opened the Lexus' tailgate and pointed at the cargo area.  Thinking that I wouldn't have to retrieve the shovel from my vehicle, I peered inside.  I thought that I'd see a shovel, and that I'd have to move the extra water containers and food in order to reach it.  I mean, everyone carries extra food and water when driving in the desert, right?  Well, there were no water containers, nor any visible food in the cargo area.  And, no shovel.  However, there were three department store shopping bags, that were filled with recent purchases. I couldn't believe it.  Didn't these people realize that they could die of thirst, out here?  Of course, I offered them water, but they declined; one of the men pulled a plastic water bottle from a large pocket on his pants and waived the bottle at me.

Before digging could begin, we'd need to raise the Lexus in order to dig underneath it. Once again, my incredible pantomiming talents paid off.  By the way; did you know that pantomime was a form of entertainment in ancient Rome, that was usually accompanied by music?  Well, my wife is a vocalist, but having her sing while I pantomimed the need to get the jack from the Lexus just seemed...wrong. At any rate, the I jacked the Lexus up until it looked like I could get at the mound of sand under the center of the vehicle.

In meantime, my niece had retrieved the folding shovel that I always carry in my vehicle (which, at that time, was a 2000 Jeep Cherokee), I proceeded to dig some of the sand out from under the Lexus, in the hope that these folks would take the hint.  They did.  Well, at least the women in their party did.  I figured this out when the two ladies started speaking harshly to the two men while pointing to me (as I dug.)  One of the men then approached me and gestured for the shovel.

While the gentleman dug, my niece and I placed small rocks under the rear tires of the Lexus.  After it looked like enough sand had been removed from under the Lexus, I lowered the jack.   Our labors paid off, as the lady who'd previously opened the tailgate to reveal the shopping bags was able to back the vehicle back on to the trail.  By this time, the men had put their belts back on.

After thanking us profusely - I didn't need to understand their language to pick up on this- the two couples got back into their respective vehicles and continued down the trail.

Assuming that you stay on the trail, "higher ground-clearance" doesn't mean monster truck.  I've driven this trail several times, both in my wife's Subaru Crosstrek and in my own 2020 Subaru Forester.  Both of these vehicles are completely stock; I just had to steer carefully around some of the larger rocks that are encountered along this trail. 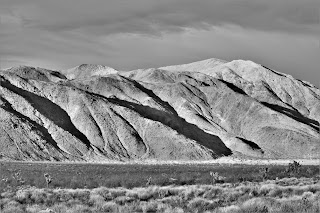 An interesting stop along this trail is "Squaw Tank", which is a water tank that was built by ranchers at the turn of the twentieth century.  There is a little parking area, and a short hike takes you to the old reservoir.  Some climbing may be necessary to secure good views of the reservoir, so be careful! 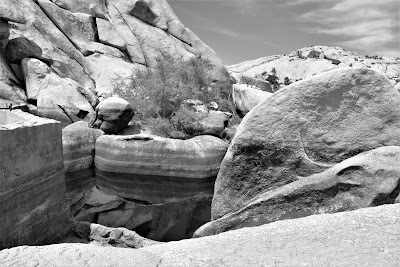 Perched on Malapai Hill is "Balanced Rock."  Actually, this rock is one of several in the park that are referred to as "Balanced Rock."  This one, however, is accessed via a relatively easy 1/4 mile hike from the Geology Tour Rd.  I say "relatively easy", because no hill climbing is involved.  However, a 1/4 mile is a pretty long way from the parked vehicle - visitors must still wear rugged footwear, a wide-brimmed hat - and they must carry water.  It is very easy to become dehydrated, even on this short hike.  These requirements apply even during the cooler weather. 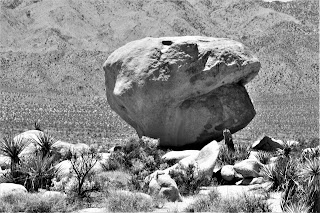 So, I hope that you have enjoyed this glimpse of the "road less traveled."

Posted by SandNSky at 8:45 AM No comments:

I'm working on a new article for this blog...

Thank you for your patience.
Posted by SandNSky at 10:57 AM No comments:

Flying through and over Mule Canyon...Calico Mountains...

I filmed this on a very windy day in the Calico Mountains.

I find that the Phantom 4 can be flown safely in 35 mile-per-hour winds, but notice the slight side-to-side motion in the video at times.
Posted by SandNSky at 8:55 AM No comments:

Ironcically, I have spent more time photographing the rock formations and panoramas, than the Joshua trees themselves.

These images were taken during my visit to the park, earlier this month. 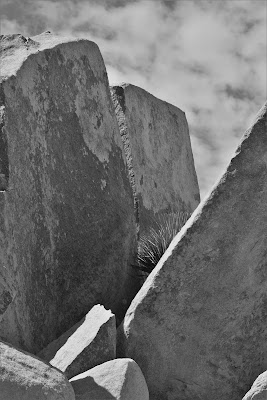 The image on the left intrigued me, because the huge slab on the right side of the photo seems to have been knocked over; as though it was just a domino. 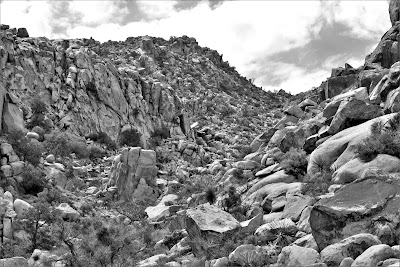 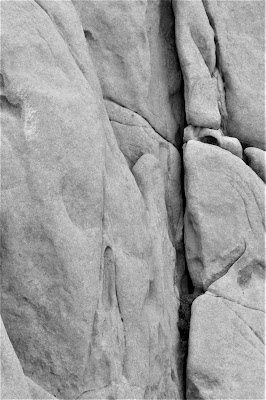 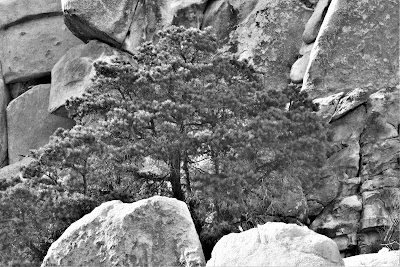 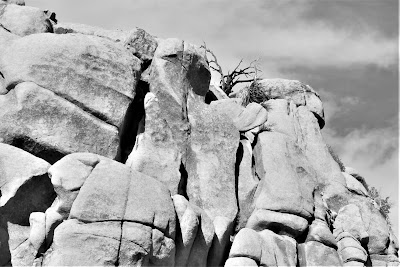 This tree poking out from the top of this formation, looks like the claw of a giant creature that is climbing over the rocks. 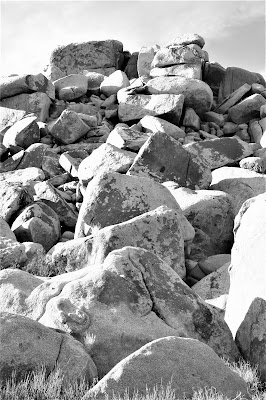 Here's a group of jumbled rocks that I shot, along one of my many sojourns along the Geology Tour Roaa. 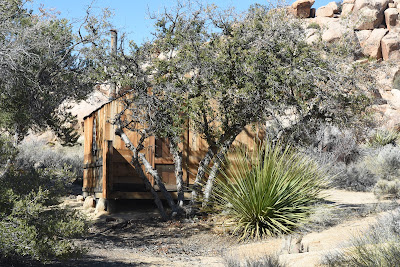 One of Keys' children remarked that the only toys available to the kids were pieces of wood and iron!
Here, a hidden cabin peeks out in a remote corner of the ranch. 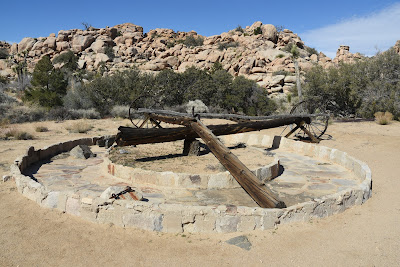 Posted by SandNSky at 7:41 PM No comments: